One of the most iconic and legendary vehicle brands of all time is Porsche. Whether you’re a fan of these beautiful cars from afar or an aficionado collector with several in your garage, most can agree Porsche has made and continues to make a big impression on the industry. From fierce engines to sleek designs, there are certain attributes you’d expect from Porsche, too. One feature that fans and enthusiasts can agree is likely the most iconic is the Porsche Whale Tail. It’s a Whale Tail car that stands apart from all other performance models.

Looking back, there is a unique history behind how the Whale Tail came to be. And these are the historical details you may know about this globally recognized Porsche-exclusive feature. Explore further to uncover the origins of the distinctive Whale Tail, Porsche’s signature design. 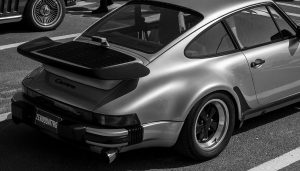 Do you remember when you first fell in love with Porsche? More specifically, when did you first encounter the iconic Whale Tail on these legendary models? The Whale Tail made its official debut back in the mid-70s. It’s a large, vented spoiler that sits just above the Porsche engine and is distinctly more substantial than any traditional spoiler designs that came before or since.

The first Porsche to roll out of production with this now-signature feature was the 1975 930 Turbo. Back then, Porsche engineers knew the 930 demanded something different. This sleek car’s turbocharger was the first upgrade, deriving from the 917 winner of the 24-hour le Mans in 1970 and 1971. You might also recognize the 917 likenesses from Steve McQueen’s movie Le Mans.

The Whale Tail intended to build on that racing nostalgia. Porsche designers brought back the heart and soul of Porsche’s legendary racing history, re-interpreting these prominent spoilers with more modern flair for the times. 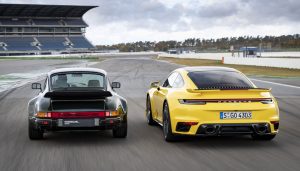 Today’s spoilers come in all shapes and sizes, intended to streamline airflow and the aerodynamics of any car to achieve peak performance. But decades ago, spoiler technology and designs were only reserved for the racetrack. And unlike traditional spoilers you might find on fleets of modern sports cars, the Porsche spoiler has been and continues to be more prominent in style and functionality.

The Whale Tail and the Duck Tail are different in size and scope. Both are Porsche favorites, ideal for streamlining airflow and maximizing performance. But where the Duck Tail design has the look and feel of a more hatch-like spoiler extension, the Whale Tail dominates the space above the engine as a stand-alone, vented performance mechanism. Both are iconic among Porsche models. However, enthusiasts know the Whale Tail is far more race car-inspired, transforming street-legal models into pavement-chomping beasts.

Early automotive regulation stepped in with demands on automakers, including requirements for Porsche’s signature spoilers. In fact, as Hagerty reported, industry regulators almost killed the iconic Whale Tail car design altogether. Porsche had appropriately sought approval for the Duck Tail that you’ll see on many early 70s models, including the 911 Carrera 2.7 RS. But when the Duck Tail morphed into the official Whale Tail, the German automotive authorities put the brakes on the design.

The core problem with the Whale Tail, according to regulators, involved safety concerns. Because they hadn’t really encountered such a racing feature on street-legal cars prior to 1975, it forced them to take a harder look. Regulators took issue with the Whale Tail as a hazard to bicyclists who might run into the spoiler from behind and get hurt.

As out-in-left-field as that might sound, Porsche didn’t take these claims lightly. Engineers immediately went back to the drawing board and devoted hours to performing crash tests. The results included a rubber edge on the iconic Whale Tail, reducing injury risks from passing cyclists, which still didn’t satisfy regulators. Porsche instead of launching the revolutionary 911 Turbo without the Whale Tail, took their case to court, arguing the regulatory approval of other features like roof racks, bike racks, and ski racks. The court sided with Porsche (thankfully), and the Whale Tail car earned its needed approvals for production. The Whale Tail solidified its place in Porsche and performance car history.

There are plenty of Porsche features and designs that fans adore. But the Whale Tail might be one of the most iconic and widely recognizable of all. Learn more about these cars you love, including some of the most interesting history behind what makes them so endearing, right here at Porsche Hangout.